Down under the Andaz Hotel in New York City is ‘The Bar Downstairs.” As someone who has poor night vision, I can tell you, I pretty much have no clue what it looks like, but the “Cellar Door” cocktail they serve is the shiz. And I don’t just whip out the expression ‘shiz’ for just anything.

Here are the ingredients –

Pimms No 1 – If you haven’t tried this British staple, you really need to. It’s got a gin base, but with secret herbs and fruity flavors mixed in, it could also be considered a liqueur. (It’s best known for the light and refreshing “Pimms Cup” – so if you’re ever in England you MUST order one.)

bergamot syrup – Available in high end liquor stores and online, Bergamot is the citrus fruit that flavors Earl Gray tea. This syrup is made from its peel and juice and has a zesty citrus tang.

Sailor Jerry Spiced Rum (or similar) – honestly, if I only could store five bottles of liquor in my bar, Spiced Rum would be one of them.

St Elizabeth Allspice Dram (or “Pimento Dram”) – a common element in mulled wine, this is a rum-based liqueur is flavored with the allspice berry, and contains rich, layered flavors of clove, cinnamon, nutmeg and even a subtle (and I do mean subtle) pepper undertone.

An orange peel for garnish

Here’s our interpretation of the cocktail!

(If you don’t have a shaker, just add the ingredients to your rocks glass and stir carefully to avoid spillage! We hate to waste liquor!)

In a shaker, throw in about four chunky ice cubes. Why chunky? For no other reason than I like them chunky.)

Add about 4 ounces of Pimms.

Squeeze the juice of a lemon wedge in there.

add a splash of Bergamot syrup.

drop about 1/8 of an ounce of Allspice (pimento) Dram. It doesn’t need much!

Pour into a rocks glass with ice.

garnish with an orange peel.

If you need to adjust the strength, a little splash of orange juice will soften it up! 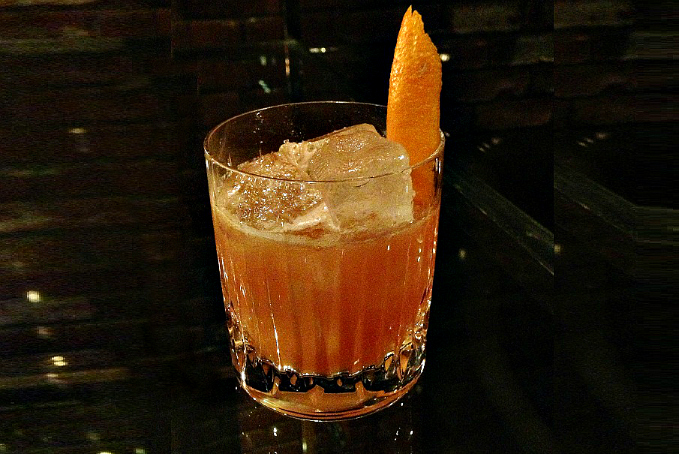