Whether you’re a New Yorker or a vistor, you really need to experience The King Cole Bar in the St. Regis Hotel. Not only for the ambience, but for the drink that was born there. Originally called a “Red Snapper,” it is the birthplace of – and has since been renamed – the ‘Bloody Mary.’ (As far as I’m concerned, I prefer Red Snapper – considerably less offensive!)
Located on East 55th in Manhattan, the bar is a New York fixture and has been immortalized in the films “The Devil Wears Prada” and “The First Wives Club.”
I go to the St. Regis to admire the 30 foot wide historic 1906 Maxfield Parrish mural of Old King Cole and slowly sip my $25.00 Manhattan on the rocks (At that price you wanna sip it slow!) While you sit there, ponder the painting before you. It truly is stunning. 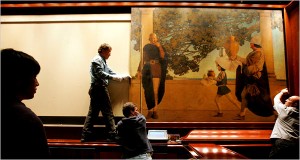 In 2007 the masterpiece went through a $100,000 cleaning which might explain the price for a drink! According to the New York Times: “After a six-person crew toiled for hours to remove the 8-foot-high painting — rendered on three 10-foot-wide panels — a full-size temporary reproduction was hoisted into place, and the bar — where the bloody mary was first introduced to New York in the 1920’s — was able to take drink orders by the stroke of noon. ” (photo at right property of the NYTimes)
There is a comical if not a little crude secret meaning to the famous painting, which I won’t reveal here! It’s absolutely worth the trip to discover the answer on your own (or ask a bartender in the know.)
This faintly lit, dark paneled old-school bar feels exclusive and private and you will at the very minimum want to wear a something a little dressy. Dress the part! 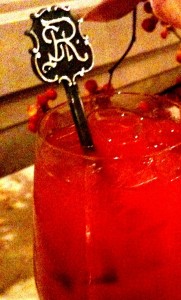 In the meantime, if you can’t escape to NYC at the moment, try out their recipe for the Bloody Mary:
Adjust the spicier elements in this recipe to your liking. Since you probably don’t have a St. Regis cocktail stirrer, you can garnish with a stalk of celery!
In the meantime, a toast to going and doing! (Or staying home and making it yourself!